For the first time in the Defense Department, a series of career field specialties is using human performance monitoring and a data collection system, as well as specialized recruiters. 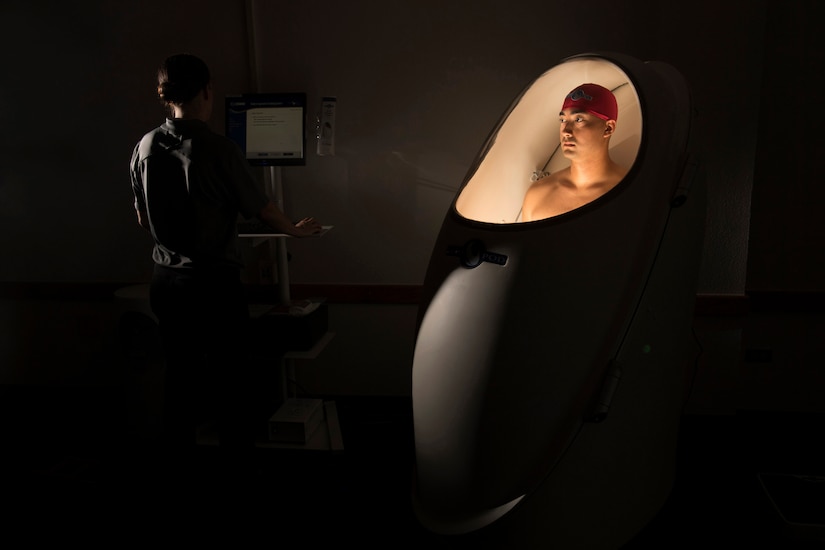 Air Force Chief Master Sgt. Josh Smith, the special warfare preparatory course superintendent for the 350th BATS, has been a pararescueman, or PJ, for 25 years. He said his team was tasked to stand up the squadron within 121 days. They shadowed the Army’s and Navy’s special operations programs and used their best practices to model this new program, he said.

The team received “amazing support” from Naval Special Warfare at Great Lakes Naval Training Command in Illinois, Smith said. “And we’re using the same contract for our coaches, so some of their staff could help us set up the program here,” he added. “It’s been an amazing partnership between the two organizations.”

He said one area the Navy would like to increase training on is psychology. “We really try to focus on that communication, team building, the character tributes of leader, integrity, professionalism, trainability and teaching them how to improve in those areas,” Smith said. “This generation knows how to text, but they need to work on communication.”

Smith said the team was tasked to improve production by 10 percent, but were able to improve it by 20 percent overall. They were able to eliminate the two-week pararescue development course, and tactical air control party candidates went from a 30 percent graduation rate to 66 percent.

Air Force Maj. Heath Kerns, 330th Recruiting Squadron commander and a special tactics officer, said the squadron pulled recruiters from 27 different squadrons across the Air Force who showed an aptitude and interest as well as other qualifications to head up this new squadron, specializing in recruiting for the three Air Force special forces career fields and its support career fields.

“Instead of worrying about 160 jobs, [our battlefield airmen recruiters] can get really smart on six jobs,” Kerns said.

The Air Force has learned that potential special operations recruits are not motivated in the same ways as recruits from the larger force, he explained. “They don’t care about the benefits or the money. They care about the challenge,” Kerns said.

“I wanted to know, ‘What’s the hardest thing in the world I could do?’ I wanted to become the most elite [and] challenge myself in the worst ways possible,” he said of his own motivation.

Kerns said the recruiters’ mission is to scout, develop and guide the future warriors for their combat calling. With this new program, the recruiters work hand-in-hand with the squadron ahead of time and have developers, retired operators, who will work with the recruits to make sure they can pass the physical training test and be ready for battlefield airmen prep before arrival.

To help recruiters understand what the course is like, about 90 of them attended a one-week version of the course, June 25-29.

“This week has been excellent training. Simple things like you normally swim with goggles, but now you have a face mask fogging up, and your nose isn’t used to having dead space, so it’s trying to breathe in but it’s not [able to],” Kerns said. “We can now absolutely understand that even though my applicant passed the test well in a different environment, he may show up here and freak out and his score may look bad. We understand the process now because we’ve lived it. It’s going to change the way our recruiters go back and work with the candidates.”

He said having the partnership with the active-duty community has also been helpful. “I reach out to my brothers and tell them, ‘If you want me to replace you with quality people, I need you to provide these things.’ It’s been a great partnership,” Kerns said.

Recruiters are critical because they’re the first contact with candidates, Smith said. “If they’re not sending the correct candidates,” he added, “that will affect the capabilities of what will be produced out of this program.”

The squadron uses many cutting-edge innovative technology systems. By January, the squadron will have a 55,000-square-foot smart gym with an indoor track with an LED lighted system called a rabbit. The gym will know when the students enter via a chip in their smart watches. The cardio equipment will read the chips as well. The weight equipment will have tablets with video cameras where the students will type in their student number and record their workout, and then the coaches will critique and send them a message if they did anything wrong in their techniques.

The squadron is the first in DoD to use a digital functional movement screening called DARI for all candidates. The camera system identifies joint mobility and strength imbalances of 28 movement patterns.

The first class had 14 candidates who were identified to be at high risk for injury, Smith said, and within 10 training days, 12 of the 14 were injured in the way the computer had predicted. “For the next class, for those identified, we gave them homework,” he said. “They wear these compression shirts and shorts that link to their tablets to show that they’re doing the exercises for accountability. The injuries went down.”

The students wear a harness with a Zephyr biomodule sensor, which measures their core body temperature throughout the day, as well as 44 individual post-training event data analytics that provide in-depth understanding of individual and group data on heart rates, calorie burns, estimated core temperatures, physiological and mechanical training. It provides feedback on windows of trainability in endurance, speed, power, strength and coordination.

The squadron’s dietician is working with Google to implement an automated process of determining a candidate’s food consumption by providing a machine-learning vision system to digitally track food. It will compare a trainee’s performance calorie burn before and after meals for nutritional intake of actual calories consumed by taking a photo of the plate of food before and after the meal. The subject matter expert can address the disparities, Smith said.

The most successful technology has been tracking omegawaves, Smith said. It directly assesses the central nervous system, direct current potential, autonomic regulation of the heart and heart rate variability and the cardiac system through and electrocardiogram. It provides feedback on windows of trainability in endurance, speed and power and strength and coordination.

The staff uses all of this technology, as well as contrast therapy, massage, cold tanks, movie theaters, a recreation room, hydrotherapy and float tanks for recovery and down time for the candidates. 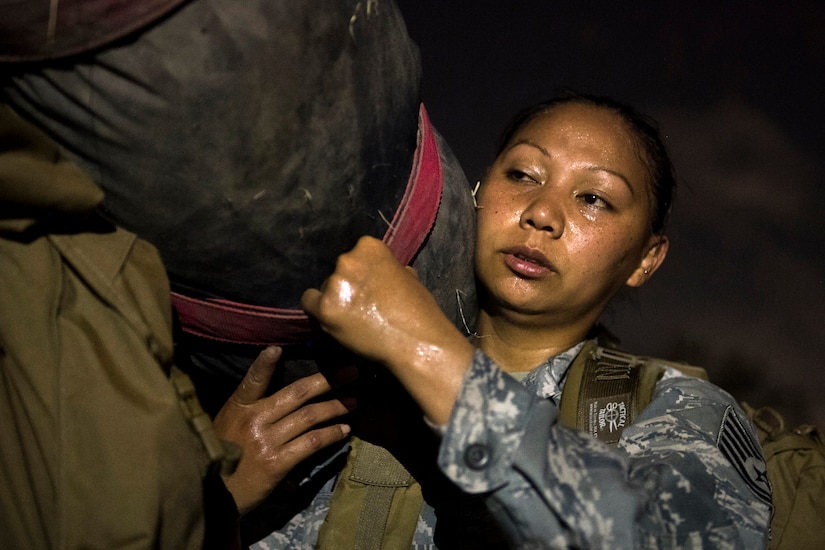 Air Force Master Sgt. Maria Teresa Pineda and other special operations recruiters carry a large bag filled with sand during a class that allows recruiters to experience the 350th Battlefield Airman Training Squadron preparatory course at Joint Base San Antonio-Lackland in San Antonio, Texas, June 28, 2018. The ruck march and sand bag carry began at 2 a.m. and is one of the many challenges presented by the squadron to help recruiters understand what their recruits endure. DoD photo by EJ Hersom

The coaches and staff consist of nutritionists, psychologists, a physician assistant, athletic trainers, medics and many more who have a minimum of a bachelor’s degree. Most of them have a master’s degree in some type of exercise physiology and multiple certified strength and conditioning credentials, and some are Level 2 and 3 Crossfit instructors.

Some of the coaches are former National Football League and National Hockey League players, one was on the U.S. Olympic swim team, and NASA’s lead strength coach just applied to be a part of the program.

“I have the most amazing group of individuals who are the most brilliant minds throughout their different modalities,” Smith said. “This is what makes this program so successful.”

One instructor, who’s ranked in the top 100 in the world for the freestyle in swimming, even enlisted to become a combat controller and is now at Air Force basic training, Smith said.

Isaiah Harris, a former Atlanta Falcons linebacker, worked with the Chicago Bears for eight years and would take the players over to the Naval Special Warfare Team program at Great Lakes. He said all the coaches work together as a team to make sure each candidate is ready for graduation.

“The dietitian, that’s our student’s fuel, the mobility strength and conditioning coach, he ensures they’re ready to perform at the highest level at each evolution,” he said. “Administration, there’s so much paperwork that goes into each of our students. We all work together just like they will work with the Army, Navy, different embassies as our battlefield airmen.”

“We all come from different backgrounds, and we [use a] best evidence, expertise approach and take the human performance broader spectrum and just max and optimize that for the students and operator staff here,” said Air Force Maj. Sean Wilson, 350th BATS human performance flight commander and physical therapist. “I know what to look for in the training because I’ve been with the operators downrange in combat. We maximize our rehab skills to get them back into training quicker. These guys are the root of our national defense.”

“Instead of someone getting to the age of 32 and they can’t bend over and touch their toes or they have so much pain and they have to see a chiropractor every day, I’m giving them a system they can take to their family and friends or units,” he said. “They can use it to take care of themselves the rest of their lives. This increases longevity of the force and makes sure these guys get fit, get strong, get mentally tough. But we don’t break them in the process, so they don’t spend their later years in pain. This helps increase healthy joints.”

“These candidates are a human weapons system, and they’re considered as such here,” said Patrick Wilson, program manager for innovations. He is a former career field manager for the Air Force’s security forces and co-creator of the battlefield airman concept.

“They are a weapon, and just like making sure my weapon was cleaned down range, the food you put into your body, the water you drink, the sleep you get, the technology we give you and how you leverage that and understanding your body and how it works [are all important],” he said. “The Air Force is breaking ground … through an investment in all these areas. It’s already starting to show a result, and it’s only going to get better. We are constantly improving our game. The results five years from now are going to be amazing.”

From the coaches to the subject matter experts and recruiters, Smith said the team continues to learn and reduce attrition rates by building a fitter, faster, stronger and more mentally resilient battlefield airman.

“We’re taking a holistic approach to it from the day they walk into the recruiter’s office until the day they graduate and walk across the stage with their beret,” he said. “At no point have we ever looked at this process in this way before, and that’s why this is becoming a more successful change in movement.”